A downloadable game for Windows and Linux

Zone of Lacryma is a story driven vertical shmup with 11 levels, highscores, speedrunning, upgrades and more.

Want to get your Highscore on the leaderboards? Chain kills to get combos while maintaining your charge bar so you can keep blasting away.

Want to Speedrun? Find the best routes in every level so you can avoid conflict and turbo non-stop to the end.

Upgrades let you customize the Prototype so it fits your playstyle.

Zone of Lacryma too Hard for you? Press the brake button and slow everything down.

The Linux version of the game has not been properly tested!! Please don't buy unless you are able to play the Windows version as a backup plan (in case the Linux build doesn't work for you)

In order to download this game you must purchase it at or above the minimum price of $7.99 USD. Your purchase comes with a Steam key. You will get access to the following files:

I love the music, colours and animation. The game does get hard (I'm kind of stuck on level 10) and you have to replay a whole stage every time you die, which can get frustrating. But overall this is a fun little package.

There is a Linux version except I can't find any kind of file to run to start it. I couldn't get the Linux version to even launch, as a result; though the Windows version runs fine (so far) in Linux Mint Cinnamon.  The only issue is that the screen blanks every ten mins or so - pause, wiggle mouse, unpause and it is fine.

So does anyone have a tip for the stage 9 boss? I've probably put a good 60-90 minutes into it alone so far (which means I've probably played stage 9 as long as the rest of the game combined) and I don't think I'm all that close to beating it at all. I don't know if I'm just missing something obvious or if it is just a random major difficulty spike, and unfortunately the only playthrough of the game I can find is of a version of the game that existed before said boss existed (lucky guy) so I'm flying pretty blind.

I get using the big lasers to try and hit the boss for me, but they don't do that much damage and 90-95% of the battle there is no other way to damage it. I made it to what feels like an ending section of this battle a few times but being forced to move that slow with both giant lasers on each side just butchers me.

I've dug the game so far but I fear I might have to give it up.

EDIT: I did eventually get past this boss (took a bit over another thirty minutes), I'm not sure what happened as it died when I was looking elsewhere on the screen dodging something else. Loading everything so that I could fire as many shots as possible during the brief windows it was vulnerable is what I think made a difference, in case anyone else gets stuck here.

Challenging Shmup with a relatively simple structure that absolutely excels at what its trying to achieve by focussing and refining those very same elements. You are among the last survivors of humanity and one of your tasks is to clean up space around your space station so danger stays low. I initially was a bit taken aback by how most of the enemies are just space rock and not the usual space garden variety of enemy ships, but its actually incredibly smart and refreshing to need to navigate space debris while avoiding your own defense turrets/structures and then turning that into a highscore madness by rewarding the player with stronger weapon upgrades the more efficient at space clean up he becomes. Add another few layers on top with some rewarding progression systems and interesting story bits in between and this is a winner. Only downside is that the bundle version has no leaderboards, which is unfortunate, but I decided not to take off points for that as the game is very strong without it. 4,5/5

Hey, I really love the game, but cant access any of the leaderboards. Is that because its not the Steam version? I know I got it through the Racial Justice Bundle, which standard doesnt offer Steam keys, but if thats the reason and you are open to share Steam keys so all players can access leaderboards, let me know :)

Edit: Maybe require all of the interested player to send you a screenshot from the game so you know they bothered to boot it up or something.

Running into a major issue with the game. Boots up just fine, but then when I try to start a new game it hangs. I get to the screen where I can pick my save slot but after I pick one it hangs on that screen. Please help!

Same thing happens to me.

Looks great. Will buy if ported on Linux.

There is one now, except I can't find any kind of file to run to start it. I couldn't get the Linux version to even launch, as a result; though the Windows version runs fine (so far) in Linux Mint Cinnamon.

Hi! Game seems really neat so far. Unfortunately I've hit a bug; when I load my game, I see a blank cutscene, and after I skip it, it loads me into the bedroom without any interaction, and therefore no exits. Any idea what's up? BLM!

#metoo. (ahem) Stuck at lv5. I hope there'll be a fix eventually.

Sorry for such a huge delay :(
But please download the latest version and let me know if the issue is fixed!

this looks very interesting! is there any chance of a linux port?

There is one now, except I can't find any kind of file to run to start it. I couldn't get the Linux version to even launch, as a result; though the Windows version runs fine (so far) in Linux Mint Cinnamon.

I like this game a lot! The colors remind me of Risk of Rain, and since I'm kind of bad with shmups in general, the difficulty was about as hard as Risk of Rain. I also like the music and art! The controls are solid and the game is overall pretty fun to play.

Hey Andy, thanks for the video!
I'm glad you're liking the game so far. Can't wait til you get to the next couple of levels! ;)

Also, watching your video, I just noticed a bug on the upgrade screen!! hahahaha

Which engine you're used in development? It's Unity or something else? :) 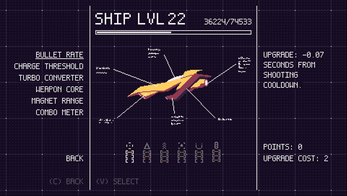